Elle US features some of the funniest women on the small screen for its annual Women in TV issue ! Zooey Deschanel, Mindy Kaling, Amy Poehler and Allison Williams each get an individual cover.

Zooey Deschanel, wearing typical Valentino, talks about the idea that girliness connotes weakness and how it comes up less and less.

Allison Williams, while looking at us sensually, compares her style to Jennifer Anniston’s and shares her strategy about becoming America next Sweetheart (good luck honey!).

Amy Poehler  is due to win an Emmy and won a Golden Globe last week for her excellent portrayal of Leslie Knope on Parks and Recreation. In her ELLE  interview she speaks about juggling between actress/producer/writer and mother.

However I am mostly excited about seeing Mindy Kaling finally getting a cover !! But is it me or is her cover very different from the rest? She’s the only one in black & white (WTF!) and on top of that she didn’t get a full but only a head shot (WTFF !?!). Anyway Mindy Kaling herself responded to the controversy surrounding the lack of her curvy figure on the cover on Twitter. 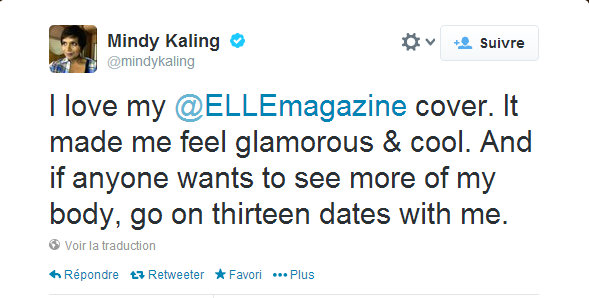 The Mindy Project, while not getting super high ratings, has its crew of faithful followers, especially with its fashion. Mindy Kaling herself seems like a very down to earth girl and possesses a mad sense of style. She even has a blog to  document her shopping finds. When will her Vogue cover comes? Hopefully this one will be in color!