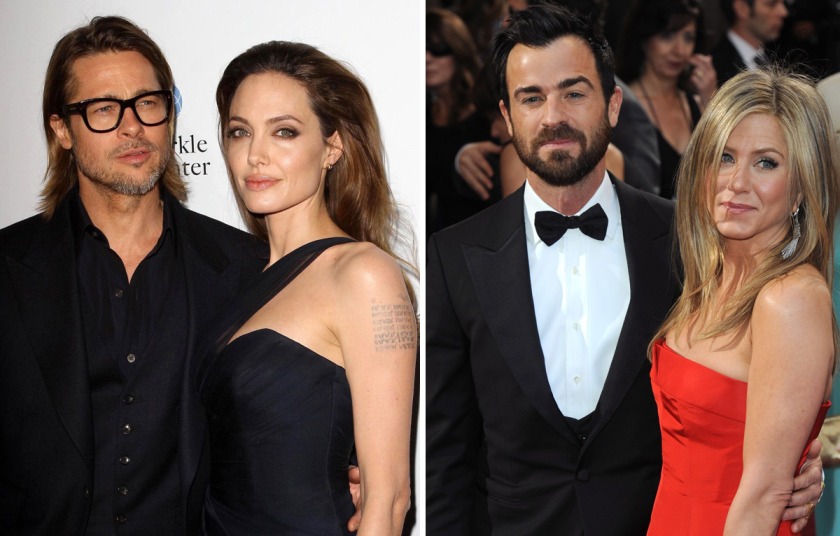 Jennifer Aniston is the most celebrity stunt of all celebrity stunts that exist on this planet. According to Vulture, she is a tabloid star with a perfect understanding of the public relations machine.

Her latest commercial for Aveeno debuted on Oscar night. This advertisement is more promoting Aniston being her own manager , publicist, PR etc… than the product itself. Have you noticed that we barely see or hear about the product that she supposedly is endorsing? If you read the advertisement correctly, it tells exactly what the Aniston Brand is: she’s the actress who’s best role is being a ‘Celebrity’.

Let’s go back to 2005, when the Aniston’s story made a new turning point with the biggest divorce scandal of Hollywood. Hollywood usually doesn’t make such a big of a deal about divorces but in this case it involved adultery and that was (and still is) juicy. The battle between “Team Aniston vs Team Angelina“just began.

In this story, Angelina Jolie played the ‘villain’, posing as the biggest man eater of Hollywood. The rumor has it that she was having an affair with every  movie co-star she used to work with. On the other hand Jennifer Aniston was the victim and her precious Brad had been stolen from her. Since then both parties have earned lots and lots of visibility and money just by t(s)elling their private tumultuous and oh-so-fascinating life-story on tabloids. It worked very well. It still does actually. 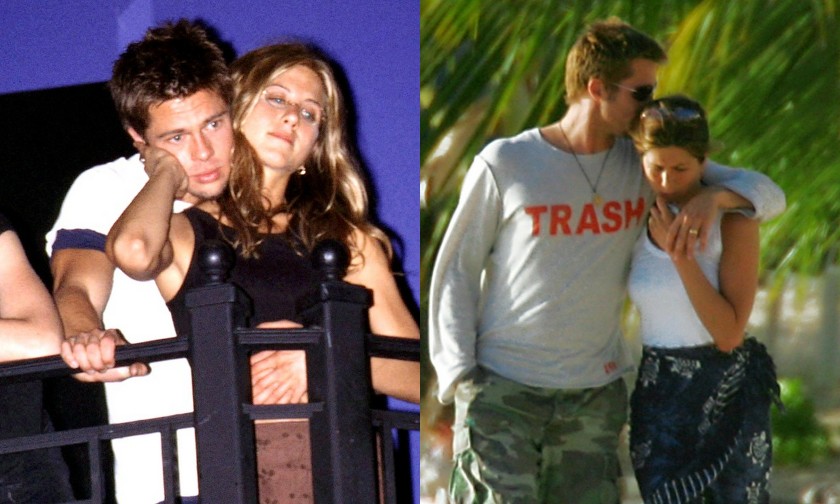 For Aniston, being “The Good Girl”-style is the (only)best role she ever had and played. She hasn’t received such high marks for any other movie since her 2005 divorce from Pitt.

Her relationship and marriage to Brad Pitt became the official confirmation that she had star power, and the subsequent Angelina Jolie–brokered dissolution of that marriage confirmed to the media that they had been right to anoint her a person of interest, and they gave her a lifetime pass on their coverage calendar.

She’s forever “Jennifer Aniston”; she hasn’t proven that she’s the kind of actress who can vanish into a period piece, or completely transform herself into a role. (vulture)

Jennifer Aniston was for a long time the best “Single Woman” of Hollywood playing the pity card.

She has enabled this fascination by always dating famous people (and then breaking up with them), so every movie she releases is met with a flurry of press, because her publicity rounds are a fine opportunity to ask about her private life (Vulture).

Even if she’s still valuable for movie, she certainly brings name recognition and press to any project, we still observed a certain Aniston fatigue. Her problem is that she’s a walking tabloid headline. Her life has become such a spectacle that it’s overtaken her persona as an actress.

On another hand we believe she’s a perfect brand endorser because her story still fascinates people even after 8 years now. She has been the spokesperson for lots of brands such as Smart Water, Aveeno, Living Proof (hair care), or L’Oreal. Sources tells Lainey that, like Drew Barrymore, she’s apparently working on her own branded makeup line and clothing live.

The Aniston’s brand is working hard !

Couple branding is a very efficient strategy and made is way for a lot celebrity to gain media visiblity. As we know many couple are way more powerful than they could ever be if they were single (take for example Béyonce Knowles & Jay-Z ; The Beckhams; The Smiths, etc. Forbes). Being a strong (or chaotic) couple earns you a lot of media visibility and tells a very fascinating story.

There always had been a comparison between the two actresses. But in a certain way, Aniston and Theroux are kind of the B-list version of Brad and Angelina. They are both Mr and Mrs Hollywood with one of the most widely recognizable faces and a world-renowned beauty, but with strong differences in terms of value.

Brad and Angelina have a clear advantage because they show a strong professional image. Combined with the prestige of their mutual project and the visibility they gain, they are “real” actors. It turned out that Brandgelina Duo are one of the most powerful couples in Hollywood (Forbes), Pitt’s films have earned a cumulative $1 billion internationally in the last five years alone (Vulture). The two are highly bankable for Hollywood studio, she won an Oscar, he got nominated, and they together made numerous magazine covers for the past years (13 for her and more than 18 for him). Plus Angelina Jolie  has transformed her public persona through dedication to charitable causes. From bad rebelious girl she is now a universal woman inspiration.

Jenny cannot compete against that.

“She’s been playing Rachel from Friends for the past fifteen years. She needs to do something different. Vulture

Being under the tabloids spotlight can sometimes be a problem and sometimes it’s an asset.

Every stars can be defined in terms of their tabloid presence. Selling their private life always has been prolific for them so they won’t make it stop anytime soon. There isn’t a week without you hear rumouring about Brandgelina or Anistheroux weddings. Now it’s wedding battle and the tabloids will finally get their real-life “Battle of the Bridezillas & Groomzillas, Celebrity-Style.”.

A Brange vs JJ wedding-off is GREAT for Gossip.

Classic make-up-a-story following PEOPLE’s article last week that JJ are planning their wedding in the next few weeks. But you can see how the eternal Triangle still makes headlines, no matter how unreliable the source and implausible the report.

Apparently Aniston is now into adoption juuuuuuuust like Angie. She really wants to win this tabloids battle.

What next for Jennifer Aniston? Will we finally see her getting rid of the betrayed wife image? After all The People still love Jen.