The Oscars race is a big machine. The academy certainly not judge only on the performance but what media says certainly have an impact. Look at how Jennifer Lawrence playing the “real girl” very well and Anne Hattaway was everywhere begging so much for her Oscar. And finally, Ben Affleck master of all win bigger for complaining everywhere how rude was the academy for not nominating him in Best director field. So does Oscar campaigning even work? One Oscar consultant replied, “Does it make a difference? Absolutely! (Vulture)

So, who are already campaigning for Oscars 2014 season. Look at the pre-campaign strategies :

Nicole Kidman will certainly be topdog of next Oscars 2014 season. We will probably hear sooner or later that her as Grace of Monaco is the greatest performance gives of all her career. She actually have a long career with already 3 nominations and one win for The Hours in 2002. Plus, she is Hollywood sweetheart, she’s Australian and Aussie needs a new actress to win for once. 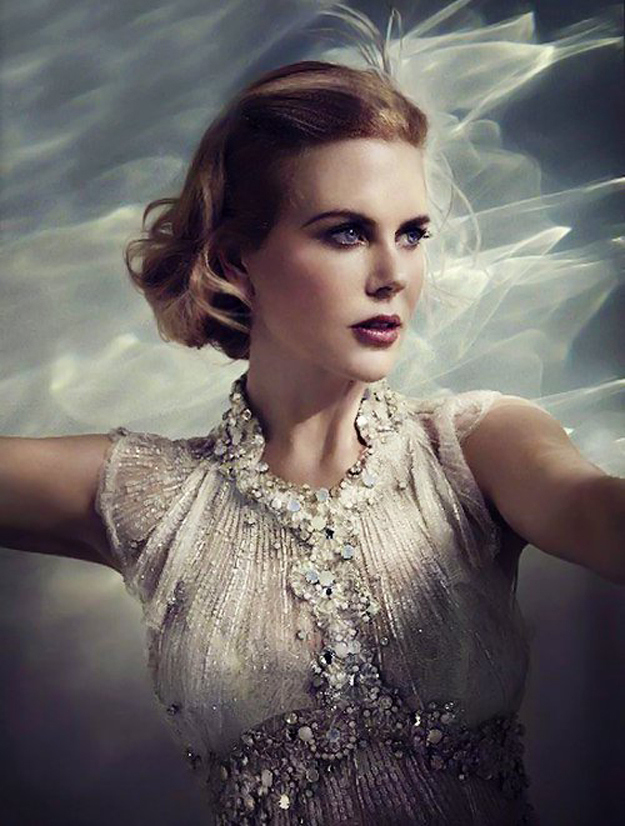 Zoe Saldana will certainly be the direct concurrent in her so controversial biopic of legendary jazz singer Nina Simone. She won’t win because she represent the Black actresses identity issues in Hollywood. Hollywood has a twisted perception of black women image in our society. She is in a Halle Berry inheritance being a color/non-color “white washed” actress . Zoe Saldana has finally responded to critics in a recent interview right after the Oscars (see already hard campaigner):

“I guess what kept me from being hurt by the negative comments was that I’m doing it for my sistas and my brothas and I don’t care who tells me I’m not this or I’m not that, I know who I am and I know what Nina Simone means to me.

I did it all out of love for my people and my pride of being a black woman and a Latina woman and an American woman and that’s my truth,” _ Thegrio.com

Leonardo Dicaprio has been waiting for his moment for a long time now. Especially in a 2 movie year. In 2002 it was Gangs Of New York and Catch Me If You Can. In 2006 it was Blood Diamond and The Departed. In 2008 it was Revolutionary Road and the weaker Body of Lies. In 2010 it was Inception and Shutter Island. In 2013 then it’ll be The Great Gatsby and The Wolf Of Wall Street. (Elaine. L Lainey Gossip)

The Academy likes him, a lot, even if they ignore him for Django. They certainly won’t be insensitive to his charm and will consider him for both 2013 movie he’s leading and has already been promoted a lot. (Have you seen here and then photos of Leo as the Wolf of WS with lots and lots of hookers?). But what is his problem ? Maybe it’s the huge celebrity power that has overshadowed his acting capacities ? But hey! Baz Luhrmann and Scorsese are big names in Hollywood and Leo’s best director/mentor. So this will play in his favor. Remember him in Romeo + Juliet, Luhrmann transformed him very well. Remember him in Gangs of New York (for what he won a Golden Globes), and him in The Departed this time for Scorsese glory. He has strong assets. So for 2014 Leo will certainly gives us the “Aww, give the guy his due” sales pitch. And then win!

Matthew McConaughey (a.ka Texas T Rex by Dlisted ) had a busy 2012 year, with five movies, including Cannes’ selections Mud and The Paperboy. He won a New York Film Critics’ Circle Award for Best Supporting Actor for two other movies—Bernie and Magic Mik . According Lainey : “These awards are the first real Oscar prognosticators we have—NYFCC winners have a 90% success rate in landing subsequent Oscar nods”. Matthew McConaughey for an Oscar nomination in 2013, has a 90% chance of coming true.

PLus, Mattew is due too, he has already a long career, even if he had trouble to make good choices. He was involved in such bad movies for a while (The wedding planner, failure to launch aarg such a bad movie). But he came back with very strong role such in , Killer Joe, The Lincoln Lawyer.

We heard of it and this is coming since a couple of month now. Picture of Mattew McConogahus thinner than ever in what will probably be his best performance in The Dallas Buyer’s Club. This movie is based on true-life tale of Ron Woodroof, a drug taking, women loving, homophobic man who, in 1986 was diagnosed with full blown HIV/AIDS.

And then the movie will come out and he plays a man suffering from AIDS who becomes an advocate for AIDS treatment and, well, it might just happen in 2014, if they finish the film on time._Lainey Gossip