“Being biracial is sort of like being in a secret society,” she says. “Most people I know of that mix have a real ability to be in a room with anyone, black or white.”_ Halle Berry on Tmagazine, 2012.

Halle Berry is in the next $100-million big production ‘Cloud Atlas’. The Action adventure movie approach the fundamental question of races and genders switch.

So now this make me think about the feud around the future Nina Simone Biopic. In early September I heard a lot of reaction around this news:

Should Zoe Saldana Play Nina Simone? Some Says No !

Hollywood and the media have a tendency to whitewash and lightwash the american black history, particularly when black actresses are concerned.

This is very interesting because it shade lights on the black identity reflected by the Hollywood industry.

Hollywood has a twisted perception of black women image in our society. Has I am myself a “biracial” child ( I really don’t like this term biracial…but anyway), I feel directly concerned by this topic.

When is it going to be O.K. to not be the delicate looking ideal of what the media considers blackness to be?” Ms. Jones said in an interview._Coffee Rhetoric

At first, Mary J Blige, famous R&B singer, was slated to play her. To my opinion she would’ve fit perfectly since she’s a powerful singer of her time like Nina was. But some were a bit skeptical ” while Mary J. Blige emotes a similar feeling of euphonic consciousness in her own music, she doesn’t necessarily harness the same sense of awareness or presence as Nina did.”. Unfortunately Mary J. Blige was forced to drop out.

When I heard that Zoe Saldana was announced as Mary J. Blige’s replacement, I was very septic.

In her blog post, Tiffani Jones describes the Black actresses’s very tough experience in the Hollywood industry. She says that’s they are rarely being cast in non-stereotypical role because “they don’t have the palatable “mainstream look”. She’s adding “ the Hollywood machine requires of some of its Black actresses; so they often lose plum roles to, what I call, the Halle Berry/Paula Patton appeal… and that destructive notion often places Black identified but racially ambiguous looking actresses on a pedestal as ideal representations of the Black female aesthetic.”

So this is what seems to be the purpose of biracial actress in movies. I’m not a fan on Black is, Black ain’t debates but Jones reminded us that this practices is rather common like Diana Ross’ portrayal of Billie Holiday in Lady Sings the Blues. 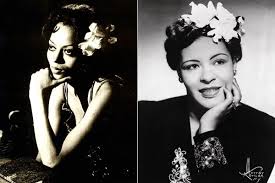 The real problem with the Nina/Zoe is as Jones describes, “A large part of Nina Simone’s work and advocacy was prompted by the challenges she faced for having dark-skin and being rejected or criticized because of it”. So now we have a right to ask if this movie will tell or can tell the right story with the wrong actress. Especially when we know that the choice of a leading actor is one of the most important and difficult job to do and can widely influence the spectator.

See Zoe Saldana on the set of the biopic in October.